The Kelp Dwellers come to the surface..

The Kelp Dwellers’ music ebbs and flows in a place between progressive, surf and psychedelic rock. The band’s sound is similar to surf music in that it is electric guitar-based instrumental rock with exuberant drums that is the perfect accompaniment for your sunny day at the beach. That said, they are not trying to emulate the typical tones, heavy reverb, and chord structures of classic surf music. The Kelp Dwellers music is composed on electric tenor guitar and electric mandocello, creating melodic structures that are more harmonically open with the chords fresh-sounding. The band also utilizes complex arrangements and dreamy passages that are found in progressive, jazz fusion, or psychedelic rock. The music is upbeat, optimistic, instrumental jazz-rock for travels under, on, and over the ocean.

The music of the Kelp Dwellers is inspired by the ever-changing light reflecting through ocean waves and by the desire to spread a little jubilation for all creatures of the sea, real and imagined.

The framework of every piece on the album (tenor guitar, bass, drums) was recorded live at Craig Kahn’s recording studio in Topanga to capture the feel of a real band playing together. Later, Montgomery overdubs guitar, lap steel, keyboard, and synth in his home studio in Malibu. Gayle Ellett (Djam Karet) also contributed fantastic guitar work on most of the tunes. S​urfacing​ is meant to be listened to as a whole, like a classic album from the 1970’s. Montgomery concludes, “for us, the Kelp Dwellers music is as much about camaraderie as it is about creating music.”

The album “Surfacing” is available on CD and as a download only at kelpdwellers.com
All music composed, produced and mixed by Todd Montgomery

The Kelp Dwellers are;

What you have on this album are tunes – not throwaway, annoyingly catchy or utterly vacuous tunes – but compositions that are easy on the ear at the same time as being completely engaging and the sort of thing into which you can really sink your fangs.

“Tricking King Swordfish” has an air of Harvey Mandel to some of the guitar leads and you'll hear a complete mix of biting soloing that all of a sudden changes to a cauldron of almost guitar-tronics, then back again to the delicacy, all the time propelled by the bouncing drumming and solid, funky bass line, the addition of even more resonant guitar figures, resounding out to great effect, even gathering strength to go even harder, all gives the track a huge amount going on that never stands still, but at the same time, commanding your attention throughout as it changes its skin more than a chameleon.

“Night Ashore” is what the name suggests – reflective, slowly flowing and a delicate mix of undulating rhythms above which guitar shapes hang and shimmer, solo and soar, as the track moves through the dusk and into a slowly enveloping night sky.

All this and more, on a simply gorgeous instrumental album – nothing demanding, plenty commanding and deserving your attention.

“Actually, the album cover of Surfacing neatly evokes their sound. The instrumentation and treatment really does sound kind of bubbly, and the music style says sunny beach and rollers, seagulls, jellyfish and seaweed. Kelp Dwellers are almost exclusively upbeat and positive in their outlook, this is music with a smile; toe-tapping tunes to bathe in, also exploring the places below the surface of normal progressive music...

Although much of the music is light and breezy, at first listen it comes across as simple and easy, there is a complexity in the construction which retains the interest and rewards multiple listens. Elsewhere, we have moments of jazzy reflection, drums sounding like splashing waves, the music ebbing and flowing, but always returning to the sun, sand and surf. It’s just such an enjoyable journey, the real world forgotten for 40 minutes or so...

It is an album which has its own sound, and it is simply here to be enjoyed. Better to sit back and let it wash over you, soak up the atmosphere and breath in the fresh air and ozone. I swear you can smell it. Just take a dip.”

"Happy, positive vibes, full of ebbs and flows, just like the sea. Just like all good prog music... Fully instrumental, it never gets boring, but takes you on a journey. The album opens with Jellyfish Song. This is like The Beach Boyson an acid trip. Serious musicianship that does not take itself too seriously...The Kelp Dwellers have produced something unique and beautiful. It sounds simple but the playing is exquisite. The more you listen, the more textures you find. This could truly be the sound of the summer. If you want to hear The Beach Boys play prog or Jan & Dean playing psychedelia, then this album is for you.

“The Kelp Dwellers’  music is a lot of fun and has its own identity and flavor...

..as the guitar soloing comes over the top it gets a definite infusion of surf music. There are some cool twists and turns built into the piece that at times take it toward fusion and more full prog zones. There are some killer heavier moments here, too...

Their music seems to do a great job of merging a guitar prog and a fusion aesthetic. It gets decidedly heavy at times.”

“The Kelp Dwellers make music that might be described as surf rock, but that really isn’t what it is, in that this is not the super technical high speed style of early 60s bands like the Ventures or Dick Dale and his Del-Tones, or even the summer-meets-fun pop of Jan & Dean and the like. Instead, this is honest and overtly melodic instrumental rock, along with elements of jazz and progressive rock...

..one thing that makes the Kelp Dwellers’ sound different than most guitar-based trios is that their material is composed by Montgomery on tenor guitars (4 strings tuned in fifths, or 8 strings in the case of the mandocello), which gives the resulting chords a different feel than one would get from a standard six string. Some of the songs like the even more breezy “Otter Finleys” groove along without a care.”

Reflecting on the song, Swordfish, Jones said, "upon my second and third listening to this, it really has grown on me. I know how hard it is to achieve something that sticks in your head. I really like the beautiful Fripp-like sounds. Keep going!"

See Below to Add to Cart

The debut record, "Surfacing" by the Kelp Dwellers available now only at kelpdwellers.com.

Inspired by the Ocean, and science fiction/folklore narratives, and innovative guitar bands. The Kelp Dwellers' music is upbeat, optimistic, melodic instrumental rock with a dash of psychedelic adventure thrown in for good measure.

Gayle has been generously hosting outdoor Kelp Dwellers' jams in the sunshine of his front porch in Topanga! It's so fun and therapeutic to just let the tunes float on the breeze, not too loud so the neighbors don't complain, while creating new parts and arrangements for the next batch of Kelp Dwellers music. Craig has a really nicely balanced travel kit that sounds warm and punchy and just right. Sometimes Joee Corso joins us (he played guitar on the tune Westward Mostly Sunny on our first record) and takes it to another level. So far lots of the new tunes are based on electric guitar rhythms, rather than the usual tenor guitars, though I'm sure the tenors will still play a big role in the new batch of tunes. 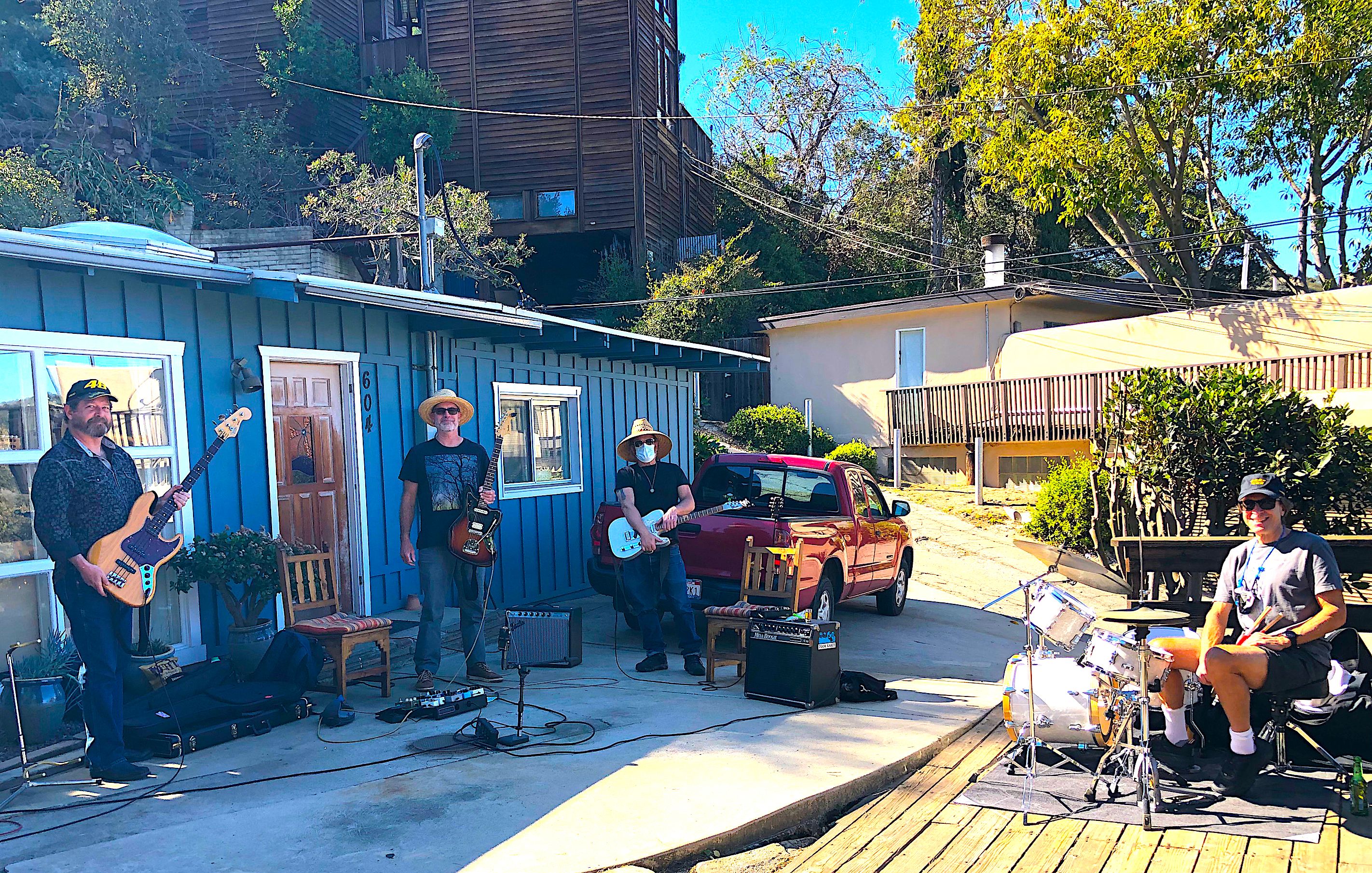 Here are the tenor guitars that are the harmonic foundation of the Kelp Dwellers music. Eastwood Mandocello, Fender Tenor Tele, Eastwood Classic Tenor, and Eastwood Astrojet Tenor. They are tuned GDAE, and are really octave mandolins. This helps give the Kelp Dwellers a unique guitar sound. 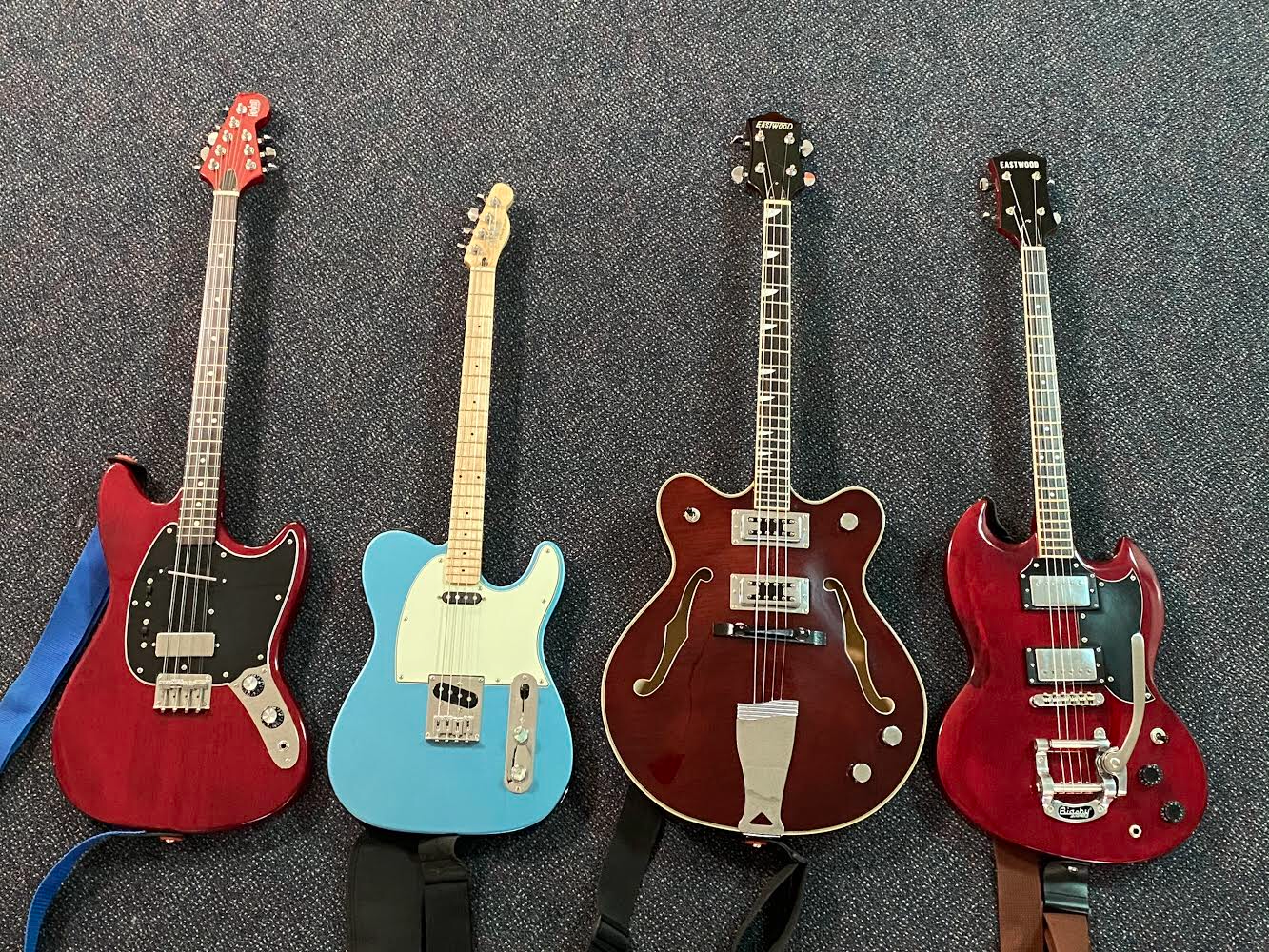 Gayle Ellett plays bass and electric guitar on Surfacing. Ellett remarked “It’s really enjoyable playing music with Todd and Craig! They are such great musicians, they are very positive, and they love to work hard, so it’s been a real treat to play music with them.” Ellett is a founding member of the Progressive Rock group Djam Karet. He’s also a multi-instrumentalist who has played on over 120 albums, scored music for numerous feature films and 60 different TV series worldwide, and currently plays in 9 bands. When he’s not busy recording in the studio, he can often be found wandering the mountain trails near his home in Topanga, California.

Craig Kahn, reacting to a question about playing drums with Kelp Dwellers, answered , "It's so much fun playing with Gayle and Todd.  As a drummer, the most important things to me are locking in the groove with the bass player and playing music that allows me to express myself.  With Gayle I've got the former and with Todd's music, the latter".  As well as getting ready to start recording on the next Kelp Dwellers album, Craig is involved with a new project with Gayle and is recording with a band consisting mostly of pediatric cardiology doctors from around the world, the BBSC, who donate all proceeds from album sales to pediatric health care.  When not playing music Craig can be found running the trails near his house in Topanga, California.

Todd Montgomery is best known for playing acoustic instruments for the last 30 years. He made 3 critically acclaimed records with Ellett in the band, Fernwood. He has played Blue Grass, traditional Irish music and studied classical Indian music on the sitar with Hari Har Rao, Ravi Shankar's oldest student. He composed, produced and mixed all the music on Surfacing. "It's inspiring playing music with Craig and Gayle. They both create at a high level and we all have a great time recording and jamming. When not working the Kelp Dwellers, you can find him teaching special education at Malibu High School or somewhere around the kelp beds North of Malibu.